I admit to being a fan of awards season which, with The Golden Globe Awards kicking things off just one week into the New Year, brings no small degree of anticipation when it comes to the Hollywood Foreign Press’ assessment of the past year in film and television. While I don’t always get to the movie theater in time to see all of what I’d consider to be the “important” nominees, I did have a chance to view three important films prior to Sunday evening’s telecast. I’d like to share my reflections about them with you now. 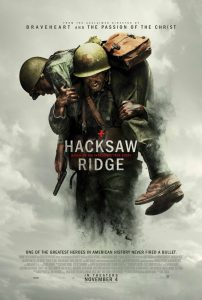 While Hacksaw Ridge did not prevail as a winner, it’s nomination drew my attention. I put it high on my list to see as it was recommended by good friend Pastor Marvin Wray of the Napa Community Seventh-day Adventist Church. As it turns out, this dramatization of a true story coming out of World War II portrays Desmond Doss, a Seventh-day Adventist Conscientious Objector who would not touch a firearm but struggled to be permitted to serve as a medic on the frontlines in the Pacific Theatre. The reason I believe this is a story that matters is that it depicts the difference a person’s faith can make in the actions he/she takes under the greatest of stressful conditions. Directed and produced by Mel Gibson, the graphic depiction of battle will be reminiscent of his treatment of The Passion of the Christ produced in the mid 2000s. While such violence on screen is not for everyone, I believed it was as important in Hacksaw Ridge as it was in The Passion of the Christ in telling what was truly at stake in their respective outcomes. 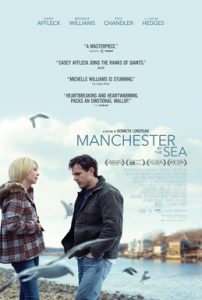 award in a drama for his portrayal of a lost soul finding redemption in an unlikely relationship with his nephew in Manchester by the Sea. The sparseness of the script allowed for an honest depiction of New England culture where human emotions are less likely to be disclosed in words. But through the power of facial expression, Affleck’s character is observed to slowly transfer as he moves from isolation into relationship. I have rarely seen a more profound and compelling depiction of what we church folk describe in Luke’s Gospel as the least, the last, and the lost. While “church” plays little role in the telling of this story, one is easily reminded why the church is the last best hope in a culture where so many are left behind. 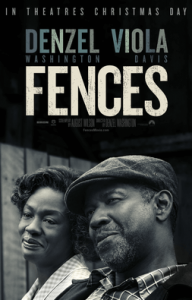 produced by the now, regrettably defunct, San Jose Repertory Theatre. This film version, directed by and starring Denzel Washington in the lead male role as “Troy”, was the vehicle through which Viola Davis won the Golden Glove Award for Best Supporting Actress. As is not usually the case, however, I found the film version to be every bit as riveting and compelling as the stage version written by award-winning playwright Tom Post. This film, like Manchester by the Sea, is not an easy film to watch because of it’s tortured depiction of aspects of the human condition. And I found further similarity as I viewed the impact of isolation taking place within an African-American family living in a 1950s neighborhood in Pittsburgh, Pennsylvania. Once again, as I consider the need for redemption and the mission of the church, I must include this film as a story that matters and commend it to your viewing.

Be sure and check my blog next week when I share Part II of stories that matter from this year’s Golden Globe Awards.