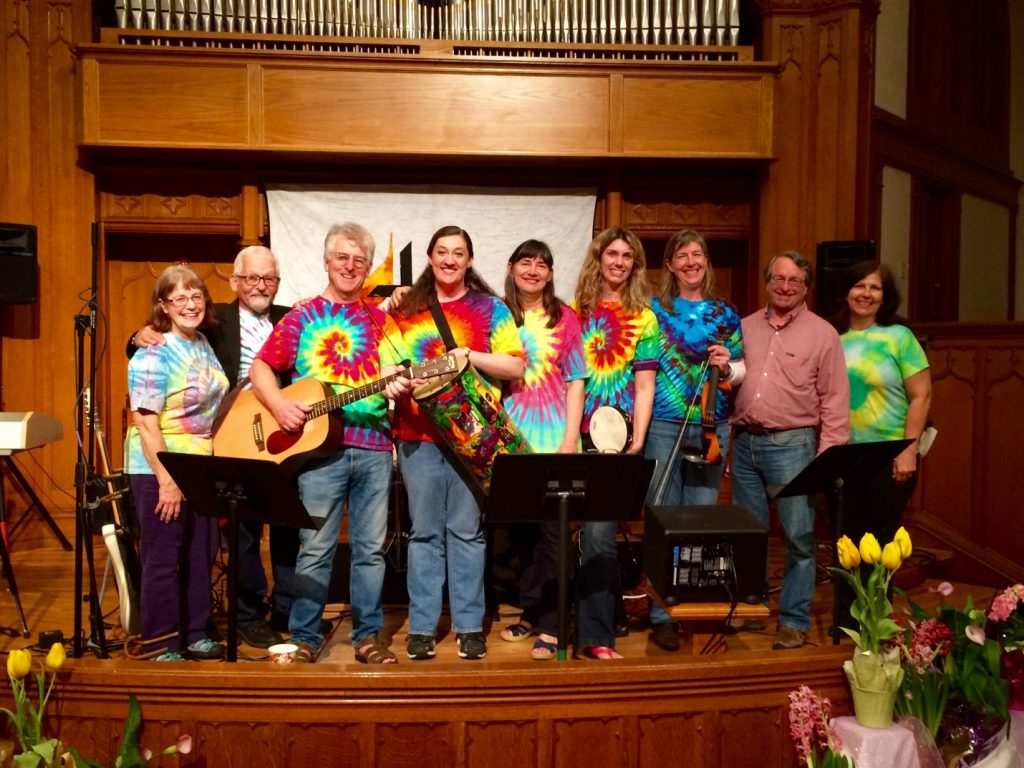 God’s House Band started in November 1998 to provide contemporary music for services once a month. Although many people have been in the band over the years, Steve Cairns and Ellen Patterson have been the “anchors” through-out. Susan Dunaway-Tsujihara was one of the original members and continues to participate as her commitments allow; Don Hitchcock played accordion and whistle with us for several years. Various assistant and student pastors have participated as well.  We did “retire” as a regular monthly part of the worship service in Nov 2013, but we are making “occasional appearances” as schedules permit.

If we have to pick a leader, it’s Ellen, although that just means she gets tagged with all the organizational stuff like planning the band services, coordinating with Worship team, inputting in worship planner, etc. Musically, we all have input and everyone gets listened to (some of us may provide more input than others, but that’s a different story!).

We are open to others joining us, and have had many “guests” in the past (Frank Hernandez on viola, Nancy Crane on flute, Susan Heims on clarinet). We don’t actively recruit new members, but if someone is interested in joining the band for a particular service, or more long-term, she/he can get in touch with Ellen (there’s that leader thing again).

The band plays a variety of music from country to rock-n-roll to gospel to reggae and pretty much anything in between. We have done covers of popular music as the piece fits the service, as well as performing original compositions by band members, but what is possibly the most fun is taking a song out of the hymnal and putting the God’s House Band twist on it. That may mean changing the rhythm, changing the chords and harmonies, or in some cases even rewriting the lyrics. Whatever the changes, they’re designed to give the pieces we do a new slant for the congregation to hear, sing and think about.

We have done two CD’s: “We Are The Body” in 2000, and “GHB – 10 Years Together” in 2008. Another highlight was the musical “Prodigal Daughter”, an updating of the Prodigal Son story with 8 original songs written and performed in 2009 by GHB members and some friends.